THEY SAY IMMERSION IS THE BEST WAY TO LEARN A LANGUAGE

// But they never said anything about a social life

After finishing college I decided to leave Chicago, the city that I’d called home for five years, to become an au pair in Italy.  Italy—a country where I didn’t know anyone, a country where five year olds could communicate better than me.  And within a week of arriving I ended up lightly addicted to the witty yet easily digestible medical TV series House.  At the time I had no idea, but watching this show fulfilled—in a lesser form—what I look for in relationships with friends, partners, and significant others.  It’s not like I could see myself with anyone like Hugh Laurie’s crass/selfish/drug-addicted character, and I wasn’t in it for the plot line or the subject matter.  I felt comfortable hitting pausing at any time to resume watching later.  I felt no need to know what would happen next, I just wanted to watch it whenever I could.

I started my brand-new-foreign-dream-life in Milano to better my Italian, but also to spend the time with Writing and Art Making that they deserve.  Because those two are like children; if you don’t give them enough attention you just might lose them. My stay began with a month of eight-hour days watching a little Italian boy who spoke not-my-language.  Living in a communication drought, I was left craving the ability to understand someone, to understand something, to understand anything.  So it didn’t take long before I began binge-watching House on a regular basis.  The mother and son of my temporary-brand-new-foreign-family knew basically no English; the father generally understood my English and I generally understood his, but Hugh Laurie even is English.  So following every family dinner—full of conversational gymnastics—I would retreat into my room to watch Hugh Laurie fake-save fake-lives.

My room was originally the little boy’s, and most of his belongings had been removed, but there was enough memorabilia present that made it feel like, well, not my room.  The comforter had pictures of Trudi dogs on it, there were LEGO creations lining the shelves, and a large poster of the Seven Dwarfs on the wall, or in questo caso “i Sette Nani.”  But I would close the door, put my earbuds in, and log into Netflix.  Watching House until well after everyone else had fallen asleep was what I looked forward to every day.  I stayed up until I couldn’t remember how many episodes I’d finished.  I was spending my time in a beautiful foreign country waiting until my next opportunity to watch an okay television show.  But it distracted me from how displaced I was feeling, from how difficult it was to stay in touch with anyone back home, from the fact that I had no one to talk to about my incomprehensible days.  Social media only reminded me that I was outside the loop, or in a different loop, kind of like how the moon doesn’t pass in front of the sun too often, an event which I also missed while abroad.  Online I found everyone’s opinionated posts (or links to op-ed pieces) about news that I hadn’t even heard yet.  And in Italy I still couldn’t understand the news.

After a month I finally started Italian lessons, where I hoped to find my new social circle.  Instead, I found that I didn’t speak the same language as any of my classmates, all we had in common were our strained Italian vocabularies.  We would not go on to become fast friends.  But House was like an old friend that’s easy to start hanging out with again, because I had already seen half of the show’s eight seasons right after moving to college.

Universities are supposed to nurture all newcomers, or at least that’s how tour guides make them seem.
But more often than not it’s difficult to find your place in the right communities, although at least there are communities.
Moving to a new country doesn’t provide a pool of others you’re likely to have something in common with, like listening to Radiohead or defying your parents’ political views (I went to a liberal arts college).  Choosing House the second time was partly due to my need for familiarity.  Watching Grey’s Anatomy would have been a risk because I had never seen before, and The West Wing isn’t on Italian Netflix.

But on top of being able to understand the cast’s language (apart from disease names like Neurocysticercosis, Blastomycosis, or Sarcoidosis) the show made me feel understood.  Not that I thought this TV series “understood me,” but what it did do was fulfill my aforementioned need to understand something else, which no one else I saw on a regular basis could.  (The reboot season of Twin-Peaks had me riveted, but I didn’t really understand a thing.)  My relationship with House was in that sweet spot where one doesn’t have to express certain needs for their partner to meet them.  At the time I didn’t recognize the show as fulfilling the role of a partner in my life, but I never had to say a word for it to give me what I wanted.  In my own close relationships, ideally, I don’t need to explain everything I do, I hope my partner and I can arrive at the point where they either understand or they trust me.  This doesn’t apply only to what I do, but also to what I am willing to ask or accept from them.  And I hope those people feel the same towards me.  House doesn’t know why I do the things I do, but it was enough of a distraction to hold me back from thinking my move to Italy was a horrible mistake, which was the more important issue at hand.

Spending most of my time worried if I was understanding anything or if I was being understood myself—in English and Italian—left me too tired to do anything but spend my nights binge-watching House. While watching, I didn’t worry about a thing.  I even knew the major plot twists already.  I understood what was happening, it was witty enough to make me chuckle, and intelligent enough that I didn’t think I was (completely) wasting my time.  Each episode generally follows the same rules: someone gets sick, no one knows why, they get sicker—when the kidneys start to fail you know it’s bad—and then Gregory House figures out the diagnosis, root cause, and cure through a metaphorical link between the patient’s symptoms and the drama among characters. Every once in a while patients die, just like in real life!  But of course the medical suspense only supplements the drama of the main storyline.  Though the show’s long term plot may not have kept me interested, it played its own role in my situation.

I had made a major change in my life, but day to day nothing was really happening.  So just as the medical puzzles complement the overarching plot of House, I tried filling in the empty spaces in my life with television drama, and this wasn’t the first time.  After getting laid-off from my full time job I spent a couple months doing nothing but looking for a new job, and, when I wasn’t doing that, watching Gossip Girl for the second time.  I had too much free time, nowhere to go, and no money to go out with.  The characters of Gossip Girl were always going somewhere and had enough disposable income to pay off my college loans without batting an eye.  While a lot of people watch television to unwind after a long day at work, I was using it to supplement the lack of activity in my life.  So in House, when characters fought, got together romantically, married, divorced, or even died, it felt like I had something going on. A story was accompanying my life, even if it wasn’t mine.  My mother always told me, “quality over quantity,” but contrary to that golden rule, this situation really called for quantity over quality.  Add up all the time I spent watching attractive doctors treat a never ending Rubik’s Cube of diseases and you’ll see that I really went for it—roughly 6,305 minutes, which is about 105 hours, or 4.37 days in just two months.

During those two months I thought House was just an escape from the language barriers I was forced to hurdle every day.

A little after someone much more interesting came along, he introduced me to his friends and family.  I finally found myself in a community, and just like that I stopped seeing Hugh Laurie on a regular basis.  It was only then that I realized I had been using House as a relationship crutch.  Communicative misunderstandings and House were the only constants in my life, everything else was new.  When you don’t have one thing in your life you’ll fill the void with something else, whether that’s people, television, books, or your work; you gotta pick your poison.

At 13 minutes into the 12th episode of the 7th season I stopped watching House altogether.  Later on I might need that last season and a half, but for the moment real people are doing the trick just fine.  The easy, instant gratification of a television series can’t push or challenge me like the people I surround myself with.  A show can’t have a conversation about why Sophie Calle’s art makes me cry, can’t give me critique on my own work, can’t understand this story, or, at the very least, can’t even laugh at my jokes, which are hilarious by the way. 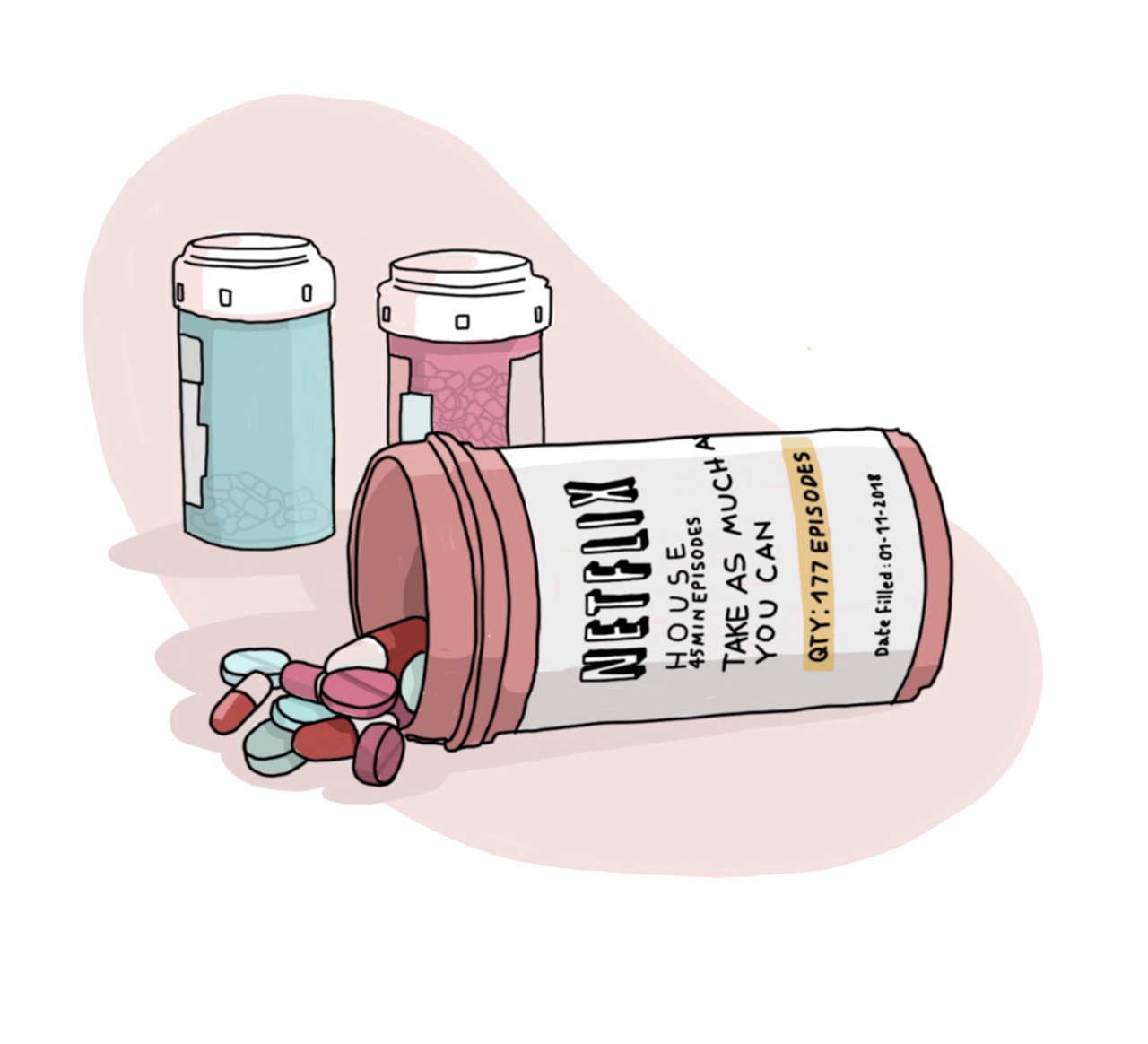 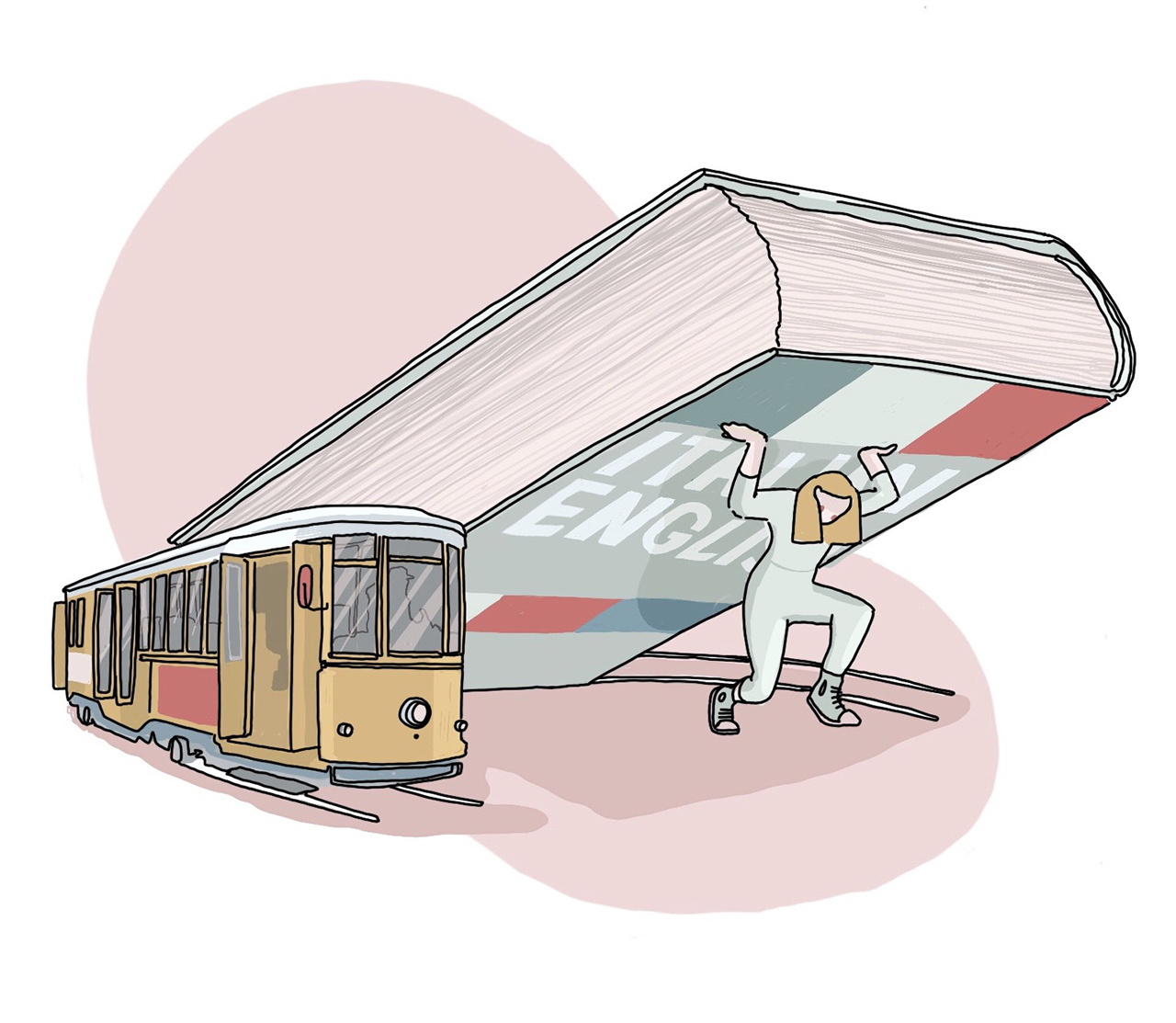 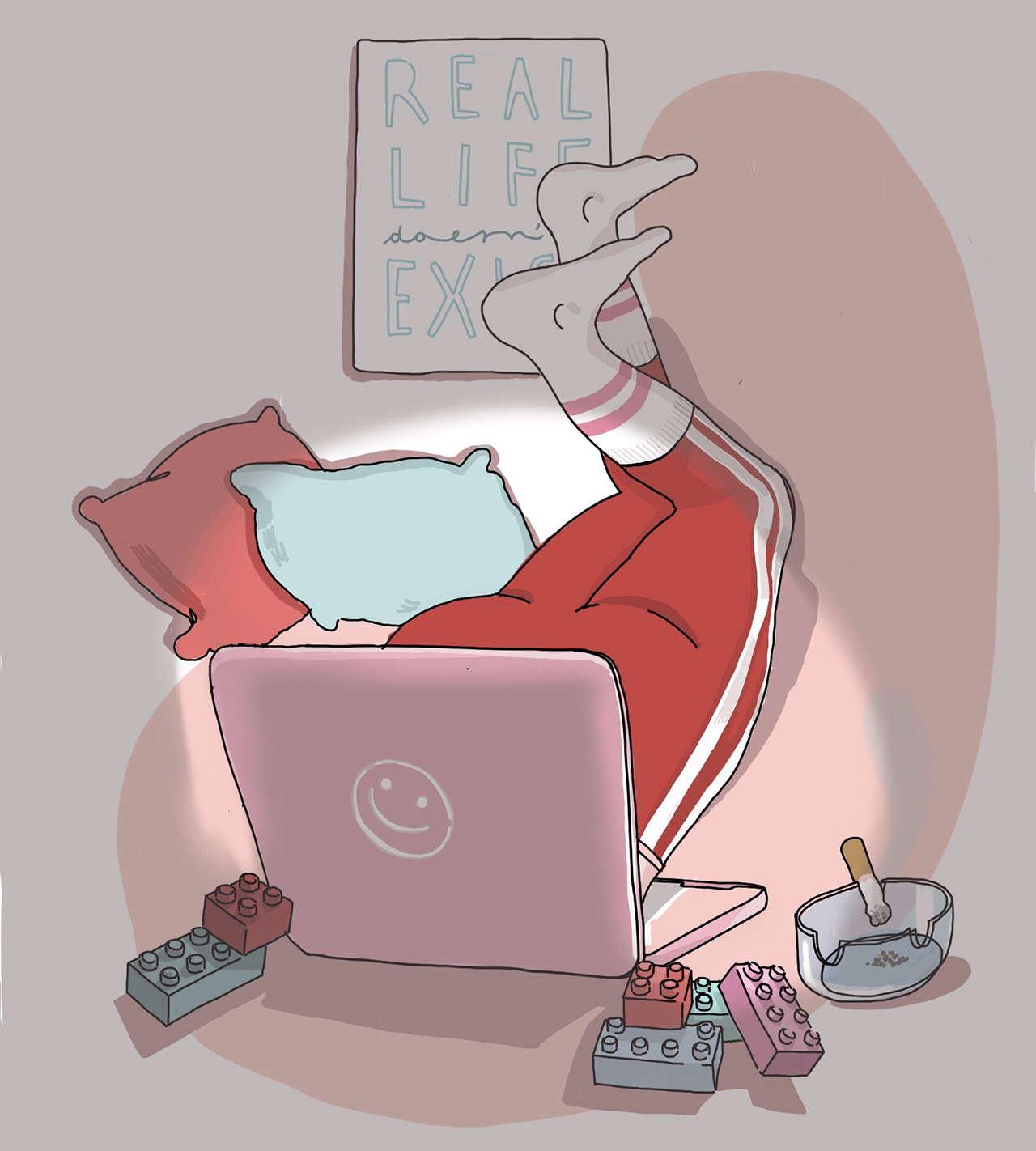 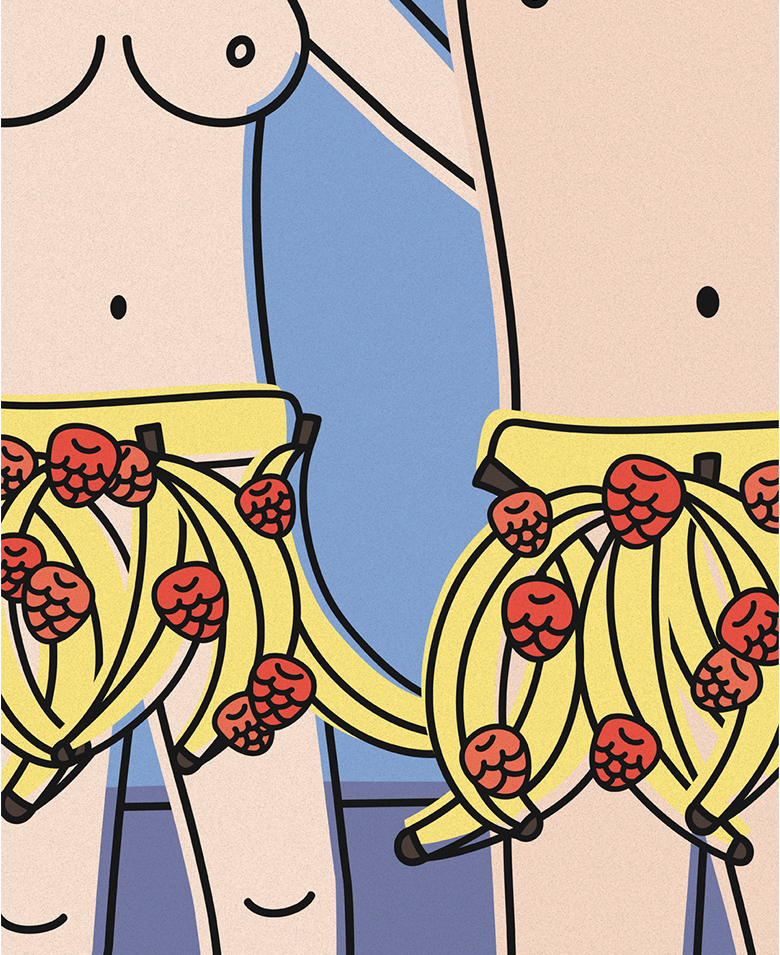 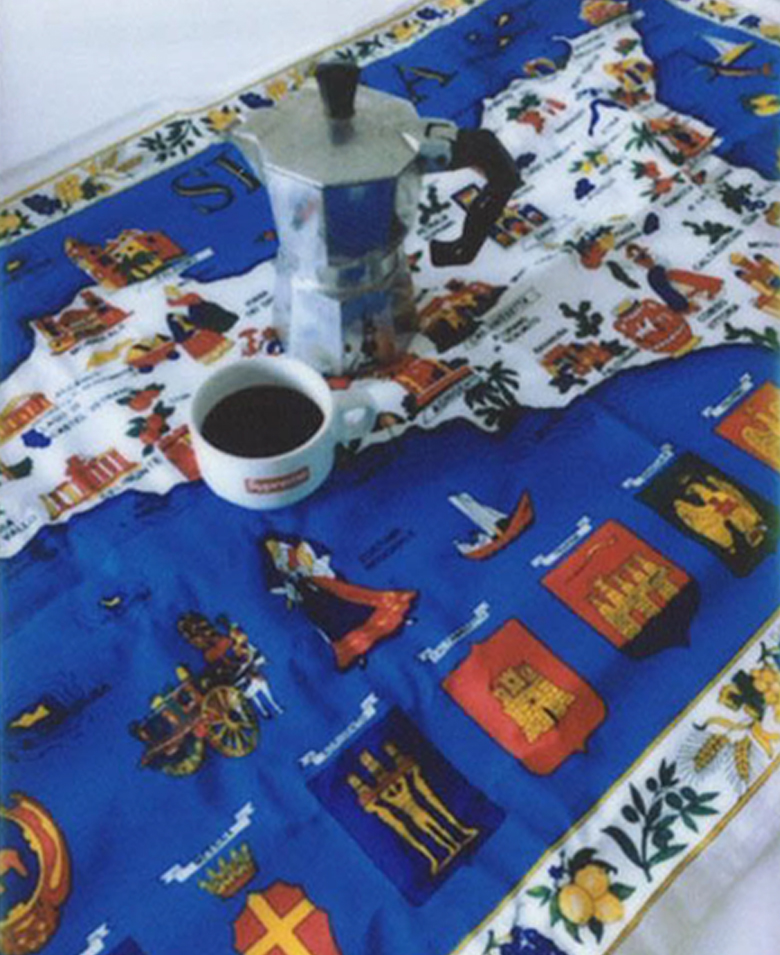